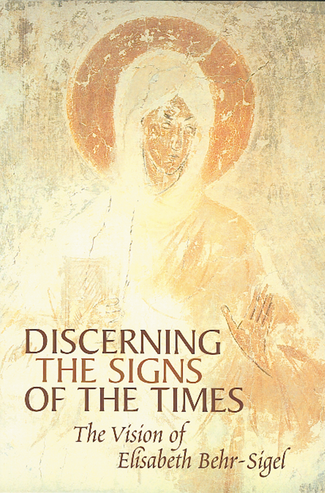 Orthodoxy in Dialogue normally reviews books no more than two or three years old. Yet Discerning the Signs of the Times is such a treasure that it merits an exception and whatever renewed attention we can bring to it from a new generation of Orthodox readers.

The title, taken of course from Mt 16:3, reflects a recurring theme in the ten brief essays by Behr-Sigel (1907-2005) collected between the covers of this slim volume. Repeatedly she appeals for the recovery of a more authentic Orthodoxy, an Orthodoxy irreducible to ritualism, moralism, or nationalism, a truly catholic Orthodoxy, vibrant and alive, fully engaged in reading the signs of these times and these places in which God has placed the Church for our salvation and the salvation of the world.

I must begin, however, with a confession. When I submitted the proposed reading list for my upcoming comprehensive exam on modern Orthodox theology, one of my examiners objected: “There are no women theologians on your list!” He gave me three names to add, of which Behr-Sigel — “the grandmother of western Orthodoxy” — stands out indisputably as the most influential. My only regret (and here I am truly embarrassed) is that it has taken me forty-five years of reading and internalizing Orthodox theology to meet her at last. I have no idea why it has taken me so long. I’ve known her name since forever.

Born to a Lutheran father and a Jewish mother in 1907, Behr-Sigel was received into the Orthodox Church at the age of 22 by Father Lev Gillet, known to the world as “A Monk of the Eastern Church.” She was intimately acquainted with, and colleagues with, such luminaries of 20th-century Orthodoxy as Bulgakov, Berdiaev, Skobstova, Bloom, Lossky, Evdokimov, Clément, Schmemann, Meyendorff, etc., in the project so dear to the Russian émigré theologians in Western Europe and later America: namely, articulating the Orthodox faith in an idiom comprehensible to the world of modernity in which they found themselves. In this she joined these great personages in a theological and spiritual lineage stretching at least as far back as Alexander Bukharev in the mid-19th century, and which includes the one closest to my own heart, Father Pavel Florensky, of whom she writes glowingly. Living almost a century, and obtaining her doctorate at age 68 (!), Behr-Sigel writes not only as heiress, but indeed as bearer in her own person of the legacy of the Russian Religious Renaissance of the late 19th and early 20th century. It seems almost beyond belief that a woman born in 1907 was still alive to write an essay entitled, “Orthodox Theological Formation in the 21st Century”!

For me personally, Behr-Sigel adds her voice to those that have been most influential in my own theological formation over the course of my long life. (God grant me to live and work as long as she did!)

Father Michael Plekon and Sarah Hinlicky are to be commended for a balanced selection of essays reflective of the breadth of Behr-Sigel’s theological interests. These range from ecclesiology to ecumenism, monasticism, spirituality, the meaning of Tradition, and the role of women in the Church. At all times, regardless of her topic, she writes in a tone of humble confidence or confident humility, neither servile nor arrogant, always suggesting, never demanding. Those in the Orthodox Church who are uncomfortable discussing the possible restoration of the ordained female diaconate or ordination of women to the priesthood will appreciate the measured, non-polemical manner in which Behr-Sigel makes her case. She critiques the spirit of secular feminism and of some feminist theologies, even while taking to heart the concerns that they raise. Whether we agree with her conclusions or not, she unfailingly earns our utmost respect, indeed our love as a dear sister in Christ — and she raises questions about women and men that we as Church simply must take seriously and commit to the hard work of answering.

Behr-Sigel’s text contains a couple of errors which the editors failed to note, such as when she refers to Florensky as a “long-term correspondent” of a man who died eleven years before Florensky was born (p. 74). Also, the book would have been well served by having an index.

These are minor glitches. Seldom have I reviewed a book that I can recommend as unreservedly as this one.

Discerning the Signs of the Times can be purchased from the publisher or from Amazon.

See Publishers’ Picks for other titles of interest to Orthodox readers.

Giacomo Sanfilippo is an Orthodox Christian, former priest, father of five, grandfather of two, PhD student in Theological Studies at Trinity College in the University of Toronto, and founding editor of Orthodoxy in Dialogue. He is currently preparing to take his comprehensive exams in August and to begin writing his dissertation with the working title, “Conjugal Friendship: Father Pavel Florensky and His Theology of Same-Sex Love,” in September. He tweets @GiacoSanfilippo.

Orthodoxy in Dialogue collects funds to distribute to the homeless on the streets of downtown Toronto.

We typically give $20 per person.

Send your donation to editors@orthodoxyindialogue.com via PayPal. Put “Alms” in your message.

Since the beginning of Great Lent we have collected $5650 for this purpose.

Visit our Publishers’ Picks page often for new books that you might want to read!

One thought on “DISCERNING THE SIGNS OF THE TIMES: THE VISION OF ELISABETH BEHR-SIGEL reviewed by Giacomo Sanfilippo”