The Way of the Peacemaker: Seeking Peace in an Era of Extreme Conflict
Eric Simpson
Ashland OR: Marginal Accretion Press, 2019 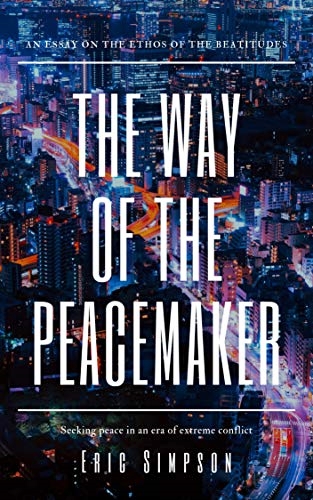 A cursory search on Amazon reveals dozens of available books on the Beatitudes. These sayings of Jesus can be explored through the sermons of the 19th-century Baptist preacher, Charles Spurgeon; Roman Catholic bishop, Fulton Sheen; Anglican cleric, John Stott; and lifelong peace activist, Jim Forest. It is entirely fair to ask, then, whether another study on the Beatitudes is necessary. What might it offer?

Eric Simpson, an essayist, poet, and Orthodox Christian, is the author of The Way of the Peacemaker: Seeking Peace in an Era of Extreme Conflict. His intent was “to write a personal book from my own experience and study for anyone who is interested, and for the work to speak for itself and become its own authority insofar as it speaks to the reader…” (9). Simpson has meditated on the Beatitudes for over a decade and keeps “finding new and extraordinary dimensions of meaning and significance about what it means to be a human being who is a follower of Christ, or rather, a Christian who is following Christ into the fulness of what it means to be a human being” (7). The Beatitudes have become for him “the lifeblood and beating heart of authentic, ancient and living Christianity” (8). This signals that we are not reading an academic study, but rather one that is rooted in the Christian tradition of pilgrimage and transformation.

Simpson devotes a chapter to each of the eight Beatitudes, followed by chapters on “The Path of Suffering” and “Seeking Peace in the Public Square.” His approach is simple and direct, drawing from his own life experience, contemporary literature, and the Christian tradition. He reinforces for the reader that this way of transformation is a process by connecting the insights discussed in each new chapter with those in the preceding ones (e.g., meekness is not achieved without going through poverty and mourning).

He maintains his focus on lived experience and transformation in every chapter, interrogating his own experience and encouraging us to interrogate ours, readily admitting that the summons of the Beatitudes runs counter to that of our culture. “These kinds of assumptions are prevalent and hard to escape,” he offers as he sifts through our illusions around wealth and poverty (18).

Simpson’s ability to delve deeply into the implications of the Beatitudes yields insights that are at times remarkable. His reflection on the promise of the meek inheriting the earth leads him to consider how we value the material order. He finds in inheriting the earth implications for both ecology and consumer culture. He offers, “…[F]or the meek to inherit the earth speaks to the reconciliation of the human person with creation…including nature and living organisms to animal life and the multitudinous creatures that inhabit the planet” (46). The “attitudes all of us often share” as consumers lead towards idolatry of the material. Matter which, through the Incarnation and the Cross has “the potential to be holy and transformative transmutes instead into piles of junk, trash, landfills, and pollution which threaten the ecological health of the entire planet”  (48).

Simpson draws on a diverse range of Christian writers in each chapter. He makes excellent use of the insights of Martin Luther King, Jr., when he explores what it means to respond with forgiveness to persecution. He demonstrates that King stood in the heart of the Christian tradition by capturing echoes of his thoughts in St. John Climacus and St. Maximus the Confessor, two 7th-century writers. The impact is twofold: it roots Simpson’s insights historically and, by crossing the lines of Christian division, grounds them ecumenically (96-102).

Overall, The Way of The Peacemaker functions as an excellent introduction to the Beatitudes for a new reader. It introduces the reader to the possibility of faithfully living into the summons of the Beatitudes, while avoiding plunging into the intricacies of biblical scholarship. It provides a layperson an introduction to a wide range of Christian writers in a way that emphasizes the radical nature of Christian discipleship, and avoids getting bogged down in the theological differences that plague too many inquiries.

The book, however, is not without its drawbacks.

The Way of the Peacemaker is self-published. It would have been better served with independent editorial oversight. The unfortunate result is that the reader’s ability to navigate the book and benefit from its insights is impeded.

There is no table of contents. As a result, I found myself frequently fumbling to find the beginning of a chapter when I wanted to reread sections.

Run-on sentences appear in almost every chapter, making it too often difficult to follow Simpson’s thoughts. Page 14, paragraph 3, for example, is a 77-word sentence that begs for revision into more digestible portions. It took several readings to ensure I got the basic point. A less experienced reader may get lost or just give up. (See also p.50, para.2; p.51, para.4; p.67, lines 10-18.)

There are numerous inconsistencies in presentation and grammar. When citing another author Simpson will sometimes use quotation marks, but other times will not. (E.g., the words of Olivier Clément, p. 71, are in quotes; but on p. 80, when he is cited, quotation marks are not used.) It is difficult at times to know where the citation ends and the author recommences. The shifts in spacing and errors are sometimes jarring, and take the reader’s attention away form what is being said. (E.g., p. 85, where the text moves from single to double space between words, and adds in a Roman numeral: “panting for breath,  the  veins  III  the  throat  swell and  the  tongue thickens…”)

There are no footnotes, bibliography, or index. Though I noted above that The Way of the Peacemaker is not an academic study, the author frequently quotes from Scripture, Christian tradition, and current literature to support and illustrate his insights. These citations are an important part of the text. The lack of footnotes, or standard notations of chapter and verse for biblical quotations, makes it difficult for a critical reader to check context or accuracy. Similarly, the lack of bibliographical information hampers someone without an in-depth knowledge of the tradition from pursuing further interest and study.

Simpson offers the reader the message of the Beatitudes as the “beating heart of authentic…Christianity” and a roadmap for radical Christian discipleship. He demonstrates his message, but does so in a way that makes the reader work far too hard to discern and receive it.

The Way of the Peacemaker: Seeking Peace in an Era of Extreme Conflict can be purchased from Amazon.

Paul Pynkoski is a retired civil servant, the facilitator for literature and film discussions at the Anglican Church of the Redeemer’s drop-in program in Toronto, and a founding member of Voices for Peace, an annual ecumenical conference on peacemaking. He has written previously for Orthodoxy in Dialogue. He resides in Toronto with his wife, Tania Natale.

Visit our Patreon page to support our work in any amount of your choice. Every little bit helps and is deeply appreciated.

One thought on “THE WAY OF THE PEACEMAKER: SEEKING PEACE IN AN ERA OF EXTREME CONFLICT reviewed by Paul Pynkoski”