St. James “the Brother of God”

I was moved to write a commentary on the Letter of James and, as of this past week, it is in print. I have written other books on specifically biblical subjects, one of them a commentary on the Sermon on the Mount (Taking Jesus at His Word: What Jesus Really Said in the Sermon on the Mount, 2012), but that was only a pastoral analysis of a single lengthy passage in Matthew’s Gospel; and another short volume in which I looked at some of the symbolic images in the Gospel of John and explored their meaning (The Woman, the Hour, and the Garden: A Study of Imagery in the Gospel of John, 2016).

But The Letter of James: A Pastoral Commentary is my first venture in commenting on an entire biblical book. There have been many commentaries on James, of course, but I’m audacious enough to think that mine is, at least, timely. If there was ever a season when we would benefit from opening up James afresh and really listening to his message, ours is certainly one such time. A few of my reasons, then, for writing the book might be worth sharing here.

First and foremost, it is the epistle that, above all others in the canon, sounds the most like Jesus Himself, as we find His words in the Synoptic Gospels. This should scarcely surprise us, since—as I argue in the book—I believe the letter is authentic, not pseudonymous. It seems to be an encyclical that comes from the hand or dictation of James “the Just” of Jerusalem, “the brother of the Lord,” written sometime between the years 58 (Paul’s arrest) and 62 (James’ martyrdom) to counter a distorted form of Paul’s message. A distorted form, I should add, that is in many ways still with us today. 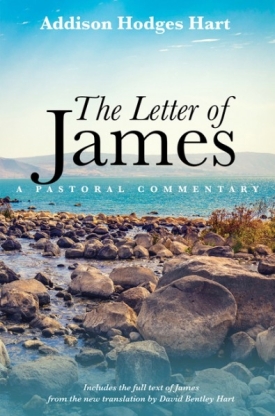 James, arguably, had known Jesus longer and more intimately than others among His disciples (despite the fact that he and Jesus’ family had not at first been followers of Jesus). In fact, as I suggest from evidence derived from existing fragments of an early Aramaic Gospel, James and other members of Jesus’ family may have been followers of John the Baptist, only later coming to recognize, perhaps after some struggle, the consummation of the Baptist’s ministry in that of Jesus. James’ much later concern to correct a distorted Paulinism, then, came directly from his intimacy with the original message of Jesus Himself.

A related reason of mine for writing a new commentary on James, as the subtitle indicates, is a pastoral one. Issues that concerned James two millennia ago concern us still in our own time. James’ chief worry was that the Gospel had become so doctrinaire among the communities he addressed that certain essential moral principles stressed in Jesus’ original teachings about the kingdom of God had been shunted to the side.

More to the point, a “Gospel” that separates faith (understood by James as a commitment to live according to the way of Christ) and works (understood by James as loving actions, which, in turn, lie at the heart of the Torah) is not in line with the “kingdom” that Jesus proclaimed. “Faith without works is dead,” he says (2:17). In other words, it is the theoretical mistake of assuming that “justification” before God comes “by [a merely confessional] faith alone” that is, for him, the source of the host of dangerous problems that have cropped up within the Christian communities. Problems, that is, such as abuse of and disregard for the poor members of the congregations by the rich members and the communal inequality that stems from such derelict behavior; the lack of governance of the tongue—“blessing” and “cursing” coming unnaturally from the same organ—especially on the part of would-be “teachers”; and the conflicts and “wars” dividing the communities into camps (possibly over matters of doctrine).  For James, the genuine sign of “orthodoxy” (right faith) is “orthopraxy” (right moral action—loving action)—and in this James sounds like no one so much as his brother, Jesus. Indeed, his epistle is so redolent with the mind of Jesus as we find it in, say, the Sermon on the Mount that, although he never quotes Him directly, James’ words come closest to Jesus’ in spirit when compared to other New Testament writings outside the Synoptics, as already noted.

So, finally, in a time when we are witnessing such aberrant ideas and behavior (and here I especially have in mind the present-day American and Anglophone scene), as professed Christians aligning themselves with right-wing politics and “savage capitalism” (to borrow a phrase from John Paul II), with their shameless disregard for the disenfranchised and poor, or the equally savage rhetoric used by self-identifying “Christians” that fuel hatred and division both inside and outside the communities of Christ, we are in desperate need to hear again the clear exhortations of James, that first significant voice from the earliest decades of Christianity.

James, like Jesus, justifiably denounces the rich and heedlessly privileged, condemning their abusive use of “their” wealth and their immoral neglect of the needs of those in their midst less fortunate than themselves. James, like Jesus, also finds guilty those who take on themselves the role of “teachers,” but who speak in ways that sow discord and hatred, whose language is weighted with cursing, not blessing. James reminds the communities of Christ that they exist to uphold one another, include one another, care for one another, heal one another, and forgive one another’s sins as community. James, like Jesus, reminds us that faith isn’t merely something you think or “feel inside” or repeat parrot-like as a creed, it’s what you do —and if your faith isn’t visible in works of love, then it is dead and decaying, impure and unclean.

So, with such things in my mind (historical, exegetical, and immediately relevant), I wrote my commentary on James’ letter. Sometimes, in the course of writing it, I had the strangely comforting sense that James himself might be standing and looking over my shoulder.

I hope, if you read it, you experience a similar presentiment.

The Letter of James: A Pastoral Commentary can be purchased directly from the publisher or from Amazon.  It includes the full text of David Bentley Hart’s new translation of the Epistle of James.

Addison Hodges Hart holds an MDiv from the Trinity Episcopal School for Ministry in Ambridge PA and also studied at Harvard Divinity School. He is a retired Episcopal priest and university chaplain, the author of six previous books on Scripture, spirituality, interfaith dialogue, and doctrine, and the brother of David Bentley Hart. He resides in Norway with his wife.