On the website of the Traditionalist Worker Party (TWP)—designated a hate group by the Southern Poverty Law Center—we have discovered a series of posts appealing overtly to Orthodox Christianity to justify its Nazistic views on racial segregation and racial purity.

Although the TWP essay is more than three years old, it sheds light on the reports that we have received from within the Church that America’s Neo-Nazis find Orthodoxy to be congenial with their diabolical ideology.

It is not our intention to sully the reputations of the highly esteemed Father Harakas and Father Stănilaoe by republishing the following, but to expose as widely as possible the gravity of the threat of white supremacy to the life and witness of the Orthodox Church on American soil and throughout the world. We ignore it at our peril. 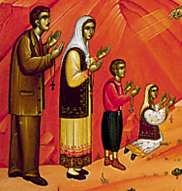 “If it is a source of joy and glory to men to have children like unto themselves – and it is more agreeable to have begotten an offspring then when the remaining progeny responds to the parent with like lineaments (characteristics)– how much greater is the gladness of God the Father, when any one is so spiritually born that in his acts and praises the divine eminence of race is announced!” –The Treatises of St. Cyprian of Carthage, p 1012.

For centuries it was just assumed that people of differing nationalities would naturally seek a spouse from among their own tribe or ethnos. And until modern times this was by and large the universal practice of both Christians and non-Christians alike. What has changed this in recent times is the ongoing march of Cultural Marxism, aka Political Correctness, in both the education system by day and the television system by night. We are now at the point when the above statements would be taken by most people as an affirmation of racism and hatred. Yet, in the not so distant past these views would have been taken as common sense and natural, as well as, demonstrating patriotic love for one’s own people.

“For just as each animal mates with its own tribe, so it is right that each nation should marry and cohabit not with those of another race and tongue but with those of the same tribe and speech.”  –Emperor Constantine VII Porphyrogenitus, Page 75 of the English translation of “DE ADMINISTRANDO IMPERIO.”

So what is “natural?” Well, according to most dictionaries it would mean according to nature. Nature would, of course, refer to how the created world works. We, as Christians, see creation as an act of God; nature is something that He designed in His infinite Wisdom and continues to sustain. In Genesis we see that God brought forth creatures to reproduce after their own kind and therefore the attraction that one subspecies has toward members of it’s [sic] own kind cannot be denied. As the Wisdom of Sirach says, “Every creature loves it’s [sic] like, and every man his neighbor; all living beings associate by species, and a man clings to one like himself” (Sirach 13:15).  Or as the old expression goes, “Birds of a feather flock together.” It becomes strange for one specific kind to be attracted to a member of a different kind. So much is this the case that the book of Tobit calls it an act of pride for a person to wish to marry someone of a different tribe. One could even make the argument that it violates the commandment to honor thy father and mother, especially in the case where the father would forbid such a marriage.

“I want my grandchildren to look like my grandparents.” –Jared Taylor on the subject of interracial marriages.

Not only is it problematic for the reasons mentioned above, but it also becomes a more serious problem when one considers the implications it would have if everyone started to intermarry. In the words of Father Stanley Harakas, “The Church holds that nations were created by God. Consequently, total intermarriage would destroy the races which God created. The Church has never advocated or encouraged racially mixed marriages.” And, I would say, with statistics stating that people of European descent (Caucasians), will plummet to a single digit (9.76%) by 2060, the European race’s destruction may become a reality.  As for those “Orthodox” Internationalists whom would claim nationality (race) is a social construct, I provide the words of one of the twentieth century’s foremost theologians. Fr. Dumitru Staniloae, helps us understand in his Orthodoxy and Nationalism:

As a personal aside, I believe that such cases where interracial relationship occurs it is usually the case of some sort of “forbidden fruit lust” where a man or woman is thumbing his or her nose at their parents and heritage.  I cannot read a person’s heart, but if this is the case it would certainly be sin against the love of father and mother.

The original of this article can be viewed here.

See the category “White Supremacy and Racism” in our Archives by Author for the full list of articles, letters, and editorials published to date on this topic.

2 thoughts on “WHITE SUPREMACISTS BASE THEIR IDEOLOGY ON THEIR UNDERSTANDING OF HARAKAS, STĂNILOAE”