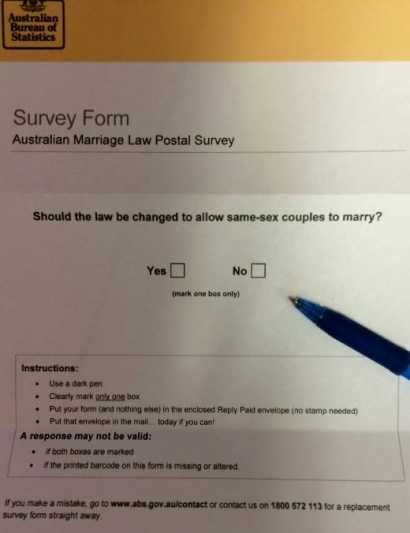 Leaders of the current political scene in Australia deemed it expedient for Federal Parliament to decide the question of changing the Marriage Act (1961) to allow for same-sex marriage by considering the results of a voluntary plebiscite. Citizens of Australia over the age of 18 years could receive a voting paper in the mail and return it having answered “Yes” or “No” to the question: “Should the law be changed to allow same-sex couples to marry?”  The voluntary plebiscite would run over eight weeks, with a non-binding result on lawmakers—the outcome would merely inform a debate on a Bill to enable same-sex marriage.

On November 15 the Australian Bureau of Statistics announced a comfortable win for the “Yes” vote: 61.6% as against 38.4% for the “No” vote. 79.7% of eligible Australians participated, a surprisingly high rate for what amounted to little more than an opt-in survey. On the same day, Senator Dean Smith introduced a bill to legalise same-sex marriage. It is expected to be enacted by mid-December.

Of interest to Orthodoxy in Dialogue’s readers will be the nature of the involvement of various expressions of the Church in Australia as the debate that accompanied the survey unfolded.

The very nature of the plebiscite was controversial. It had never been done before. Various referenda requiring compulsory participation were the nearest comparison, with only 8 out of 44 carried since Federation in 1901. Advocates for the “Yes” campaign were reluctant participants, believing that the conservative referendum pattern was to their disadvantage. Opponents to marriage change, aware of such an advantage, championed the right for democratic participation in such an important question, seemingly forgetting that democracy in Australia is exercised primarily through parliamentary representation.

Once the plebiscite was announced, however, the opposing campaigns got under way without the usual regulatory restraints that constrain referendum debates. Both sides poured in as much energy, resources, and chicanery as they could muster.

The Church became involved at many levels and with a variety of propositions. Media outlets, however, amplified the voices of the Roman Catholic Church and the Australian Christian Lobby, a conservative private company with no official church representation on its board of directors but enjoying broad support from conservative Christians.

Archbishops of the various Roman Catholic dioceses opposed the change according to the canons of the Roman Catholic tradition. Some high profile priests, however, pointed out the difference between ecclesiastical marriage and civil union, claiming that while same-sex union might be supportable in a multi-cultural secular society, the Church should remain free to exercise its ecclesiastical marriage requirements. Other traditions in the Australian church scene covered the full spectrum of support for and opposition to change.

Of particular interest to Orthodoxy in Dialogue’s readers will be the contribution of the Orthodox voice.

It, therefore, constitutes a sacred and inviolable obligation for all of us, excluding no one, to record ‘NO’ on the relative Postal Survey Form, and to express “with one mouth and one heart” our absolute objection to such an unholy Legislation, which would put at risk the interests of the Family and Marriage for the whole society.

A number of prominent Greek-Australians, however, issued a statement supporting the “Yes” campaign—as reported by SBS (Special Broadcasting Service) in September—thus revealing a divided attitude on the issue in the Greek community. This phenomenon was repeated throughout the historical churches, including many people identifying as Roman Catholic who indicated they were advocating the “Yes” vote.

On the day that the results were announced, the Greek Archdiocese responded with “A Day to Mourn but Not Despair.”

Voices from the other Orthodox jurisdictions were similarly opposed to change. Their collective stance on same-sex marriage was possibly best expressed two years before the plebiscite in a Communiqué issued by the Assembly of Canonical Orthodox Bishops of Australia and Oceania. It states:

Regarding this deeply divisive issue, and the need for the Orthodox Churches to safeguard traditional marriage, appreciation was voiced to the Greek Orthodox Archdiocese for their exemplary work in terms of educating their clergy and faithful as well as civil servants on “Speak up for Marriage: Protect the Sanctity of Marriage.” In this context, the Assembly voiced its concern for the need of children having both a father and a mother.

With regard to the issue of children adopted by same sex couples, including the issue of baptism, it was decided that the baptism of such children be left to the pastoral discretion of the respective local bishops.

Now that same-sex marriage legislation is under consideration in Parliament and, on the strength of the plebiscite result, likely to proceed, the focus of churches and others opposed to the legislation is on the protection of religious freedoms.

Australia has strong anti-discrimination laws. The Marriage Act provides discretion for religious celebrants to refuse a marriage for any reason. (The same discretion is not allowed civil celebrants.) The concerns for religious freedom, however, extend both to the ability of churches to teach traditional doctrines of marriage in their schools, and to those who provide ancillary marriage services (the well known “wedding cake” argument).

While the vote to legalise same-sex marriage in Australia has been firmly won, there is much conversation within and without the churches that must yet take place before pastoral and liturgical considerations can find a congenial, stress-free meeting ground.

Dennis Ryle is an ordained minister of Churches of Christ in Australia. He studied at the College of the Bible in Glen Iris, Victoria, under the auspices of the Melbourne College of Divinity (now University of Divinity), where his Master of Ministry remains uncompleted. He has two Graduate Diplomas in Ministry and a Graduate Diploma in Christian Education. He is in his fifth pastoral appointment, where he is about to complete 22 years.