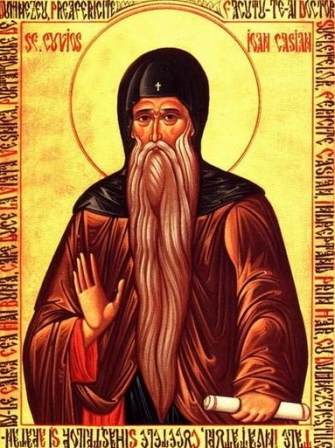 The student of history is not often well-served by the reading of secondary sources. This is especially the case when those secondary sources are attempting to characterize a theologian and his theology. Columba Stewart’s 1999 study of St. John Cassian in Cassian the Monk is a happy exception to this rule. Stewart readily admits that, as a Benedictine monk, he feels a keen debt to the writings of Cassian for his own monastic formation.

From its opening pages to its afterword, it is clear that this book is a personal labor of love. Consequently, while Stewart tells us the book is written for two audiences—monastics and scholars—it is in some sense written for that one kind of attentive reader we call amator. To that attentive reader, Stewart (and perhaps also Cassian) suggests that the insights of love can speak directly to the challenges of our own day. Specifically, in Cassian’s premodern theology, we can find threads of wisdom that speak directly to the anxieties of Late Modernity.

Stewart begins his book with twenty-three pages on the life and times of Cassian the monk. While there is not as much known about Cassian as we interested readers would like, Stewart nevertheless highlights details of staggering significance.

For example, given Cassian’s fluency in both Latin and Greek, he was able to read widely in both Eastern and Western patristic traditions, and was able to translate between languages and traditions in service to orthodoxy to rebuff the heresies of Pelagius and Nestorius. Even more significantly in terms of lasting legacy, Cassian’s experience as a monk in Egypt and his service to St. John Chrysostom enabled him to bring the “light from the East” to the West. Specifically, Cassian’s writings directly influenced both St. Benedict and St. Gregory the Great, and thus all of Christian spirituality throughout the Middle Ages.

Having introduced us to Cassian as though to a new friend, Stewart briefly summarizes Cassian as a writer, paying particular attention to his understanding and use of allegory in theology. This chapter lays the groundwork for Stewart’s exploration of Cassian’s theology in the pages that follow. While Cassian’s theological vision is complex, Stewart helpfully identifies three keys for unlocking his theology: purity of heart, which is the precondition for contemplation, which in turn is the means to the final end of eternal beatitude.

While the latter two are rather nondescript within the broader Christian tradition, the first is incredibly intriguing, especially when put in conversation with Modernity. The contemporary reader of Kierkegaard might be intrigued to see that, in his theology of purity, Cassian emphasizes “freedom from domination by sin and the possession of a deep inner peace:” this feels as though it is a direct precursor to Kierkegaard’s book, Purity of Heart Is to Will One Thing.

Likewise, the reader of St. Pope John Paul II’s Theology of the Body might be surprised to find that, centuries before the Pope was exploring concupiscence as resulting in, among other things, the loss of simplicity in man’s will, Cassian was exploring that very same theme in the context of sexual ethics and reaching remarkably similar conclusions.

Finally, even the reader of Freud might be shocked to find the psychological depth and unabashed realism of Cassian’s understanding of purity as contrasted with unchastity: for, as with Freud, Cassian recognizes the powerful link between anger, lust, and humiliation, and his descriptions of that link resemble Freud’s writings on the ego.

Cassian’s insights on prayer and spirituality also have great resonance in our experience of Late Modernity. Stewart begins Chapter 5 with a breathtaking quote from the monk, Abba Sarapion:

Oh, how I am miserable. They have taken my God from me, and I do not have anyone to hold on to. I do not know whom to adore or implore!

Cassian offers critique of Sarapion’s plight: it is because Sarapion rested in mental images of who God is that he finds himself devastated when the Church deems those images illicit and he is forced to give them up. Stewart explains that Sarapion had “reduced an encounter with a divine person to an imaginative depiction,” thereby “replacing Someone with something.” If we see in this something akin to the ethical philosophy of Martin Buber and Emmanuel Levinas, it is perhaps because—as with those two philosophers—Cassian calls us to a knowledge of the Other (in this case, God) that is not bounded by our mental categories or the limitations of our language. One almost wonders if Sarapion, in his dark night of the soul, could say with Derrida that he “rightly passes for an atheist.” Though, like the Catholic philosopher Jean-Luc Marion (and quite unlike Derrida), Cassian does believe in the potential for knowing through love, which has for its basis that purity of heart which Christ tells us brings the blessing of seeing God.

There is one final theme which Stewart explores in Cassian that speaks to the anxieties of Modernity and offers healing balm. Cassian sees tearful ecstasy as a kind of compunctious prayer that the loving purity of heart makes possible, but that in God’s mysterious grace is only given to certain believers. There are four kinds of tears as identified by Cassian, three of which are in reference to sin: tears at the memory of sin, the fear of hell, and the consideration of judgment. The fourth kind of tears, however, is something altogether different: it is caused by “the contemplation of future glory,” which is experienced as “unbearable joy.”

The reader of Dostoevsky should readily see this theology embedded in the ecstatic tearful prayer that pervades The Brothers Karamazov. This is most explicitly seen in the exhortations of Father Zosima which, as the reader will recall, are given as both a critique of and response to Modernity’s infatuation with unconstrained freedom and unbounded desire:

Love all men, love everything. Seek that rapture and ecstasy. Water the earth with the tears of your joy and love those tears. Don’t be ashamed of that ecstasy, prize it, for it is a gift of God and a great one; it is not given to many but only to the elect.

Though in his novel Dostoevsky expands on the theology of ecstatic prayer by affording it an intercessory role on behalf of all humankind, the degree of similarity between his writing and that of Cassian is astounding.

Love is a fitting word with which to conclude this essay. For though Late Modernity can often feel like a lonely place in which to sojourn, in introducing us to Cassian, Stewart has given to us a guide, and more than that, a loving and saintly friend.

Anthony Barr is a junior at the Templeton Honors College at Eastern University. In addition to the core Great Books curriculum, he studies literature, history, and Orthodox thought and culture. A Roman Catholic, he is also a Fellow with the Collegium Institute for Catholic Thought and Culture at the University of Pennsylvania. He has written for Ethika Politika, Circe Institute, and Adorans, an undergraduate academic journal of which he is now the managing editor. You can follow Anthony on Twitter.