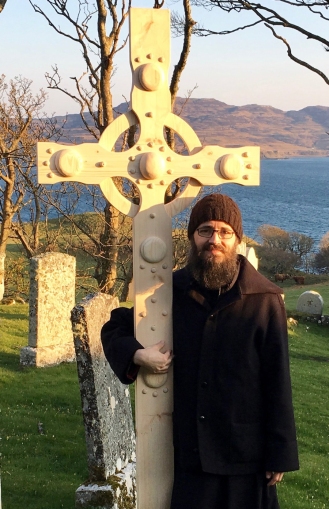 Ukrainian and Lemko on my mother’s side and Sicilian on my father’s, I was born almost 65 years ago into a half-Orthodox, half-Catholic family. My grandfather was a priest, whom I had the privilege of seeing serve the Divine Liturgy a few times in his retirement. He and my grandmother counted St. Nikolai Velimirović as a personal friend. I started getting to know other Orthodox people outside of my mother’s family when I was 12, at St. George’s Serbian Orthodox Church in San Diego where my grandparents and aunts attended.

At the age of 20 I began reading and internalizing Orthodox theology and spirituality. Three months before turning 21 I was received formally into the Orthodox Church through Holy Chrismation.

From the age of 31 to 34 I completed the course work for the MDiv at St. Vladimir’s Orthodox Theological Seminary. From the age of almost 33 to 40 I served as a priest, mainly in Romanian Orthodox communities in the Canadian prairies. From the age of 58 to the present I have been immersed in further studies in Orthodox theology, first to obtain my MA and presently working toward my doctorate.

I’ve run into some personal roadblocks along the way to my PhD, but with God’s help have started to make substantive progress again. May He grant me to finish by the time I’m 66!

My purpose in sharing this brief autobiography is to demonstrate that I have been living among “normal,” “regular” Orthodox people my whole life long, almost seven decades now. I have been reading the Fathers, and worshipping liturgically and praying privately in their words, and immersing myself in the writings of the 20th century’s very best Orthodox theologians and thinkers, for forty-five years. I’m about to begin my tenth year of formal, academic Orthodox studies, and—with God’s help—will soon produce a doctoral dissertation of which the Church might make some little use. I hope I can be forgiven for my confidence in knowing what is Orthodox and what is not, even as I fail every day to live my life worthy of the holiness, the purity, the heavenly beauty of our divine inheritance which is the Orthodox Church and her Faith.

Father Seraphim of Mull Monastery represents the finest living embodiment of Orthodox Christianity that I have ever found on the internet. If you have not already seen his videos, subscribe to them at his monastery’s YouTube channel:

Orthodox Monastery of all Celtic Saints

For your own salvation—indeed, your own sanity—ignore the celebrity priests who have made an ecclesiastical career of making you hate yourself, or other people, or the Church…or God. You know their names. Orthodoxy in Dialogue has taken them and their bishops to task many times, and will continue to do so as needed.

And know that, wherever you stand on your path to God, He loves you and delights in you already, no less than He does His only-begotten Son, and He holds you tight in His fatherly embrace.

Father Seraphim (Aldea) holds a PhD in Modern Theology from the University of Durham in the United Kingdom. He was tonsured a monk in 2005 at Rasca monastery in Bucovina, North Moldavia. In 2010 he founded the Orthodox Monastery of All Celtic Saints when he took over Kilninian, the Church of St. Ninian and St. Cuthbert, on the Isle of Mull in the Hebrides.