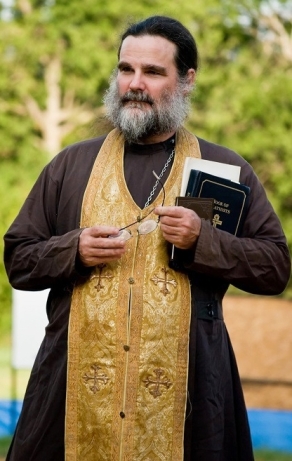 I wrote this to Father Aaron:

You have a great opportunity to do some real good, Father Aaron. Don’t just lick your wounds and lie low. Admit why you wrote what you did, and dissect it line by line, according to the truth, and with no mercy to your pride.

I wrote something recently. I sympathize with you. You made a big mistake, and it hurts. I am sure there will be voices that are smoother than oil which will try to console you. This it not the intent of my words. My intent is that you fully restore yourself. My intent is that you wound the homosexualist agenda by full disclosure about why you were ensnared in it, and become an apologist for the truth. May God bless your ministry.

I will add you to my diptychs, not because I value my poor prayers, but because the prayers of a priest, even a sinful one, are heard when they are said before the altar.

I would appreciate it if you commemorated my son Daniel in all Liturgies, He died June 11, 2017, aged 20.

I wrote this recently:

Father Aaron Warwick has been rebuked by his bishops and directed to issue a non-apology apology about the article he published [Pastoring LGBTQ Individuals in the Orthodox Church] on a homosexualist “Orthodox” website. His elevation to Archpriest has been cancelled. If this was horseshoes or hand grenades, we should praise the Antiochian bishops. But this is about truth and falsehood, and how sexual falsehood kills souls. It is also about how people are fooled by the homosexualist propaganda, and are deluded into saying things that they think are reasonable, and pastoral and loving, but are actually heresy, and toxic to the soul.

Of course, the man should be not be elevated to Archpriest.

But he also posted a non-apology apology. I wrote him and told him that if I were a bishop (insert whatever joke you want here), I would suspend him for a good long time and require him to write an explicit apology. Father Aaron has gotten away with something here. Sure, he has been embarrassed and such. But he’s not been suspended. He’s been allowed to write a non-apology apology. So, the Antiochian Archdiocese perhaps gets a “C” for this. Of course, that’s better than some of the other Orthodox bishops, who get an “F.” The homosexualist heretics look for any advantage they can have. I am certain that they consider this a victory. One can see how dishonest they are by the fact that they will not take down the article [see  Public Statement] that they had one of their lackeys [Father Warwick?],who thought he was being a reasonable person, write.

If Father Aaron really wants to make good over his serious error, he would swallow his pride and write vociferously about how his poor attitude and desire for being recognized as a reasonable person led him to say things that are outright heresy and kill the soul.

Then Father Aaron would actually be benefiting the faithful, and would be repenting of his sin. He would be helping to fight against the homosexualist agenda. If he lies low and licks his wounds, he will still be an enabler, even if he escapes with his priesthood and pastoral position.

There is no other thing to call what Father Aaron did except that it was sin. That’s a terrible word for some people, and seems so judgmental, but when a priest preaches heresy it is definitely sin.

His non-apology didn’t say that he preached heresy. It just said that he was misunderstood. Well, you can get that line about being misunderstood from a hundred articles on those websites.

Father Aaron can emerge from his serious sin a better man and a better priest. May God give him the strength to achieve this.

I have also written to Father Aaron personally, and I hope to get a reply, but I’m not holding my breath.

Father Aaron has a marvelous opportunity to show how a good man can be taken in by homosexualist rhetoric. He obviously has pastoral gifts, and I have encouraged him to use them and to refute some of the logical fallacies he made in his letter, line by line.

What is the purpose of your life young man? That is the only important question, and all other questions must be answered in light of it.

See the Warwick Files in our Archives 2020 for a catalogue of articles written in response to Father Warwick.

Also see the Fifty Years after Stonewall and Sexuality and Gender sections in our Archives 2017-19 and Archives 2020.

Father Seraphim Holland is the pastor of St. Nicholas Orthodox Church (ROCOR) in McKinney TX, a podcaster at Ancient Faith Ministries, and founder of Patriarch Joseph the All-Comely Prison Ministry. He has written previously for Orthodoxy in Dialogue.

3 thoughts on “OPEN LETTER TO FATHER AARON WARWICK: A GOOD MAN TAKEN IN BY HOMOSEXUALIST RHETORIC by Priest Seraphim Holland”