The importance of this article for an Orthodox audience lies in the simple but chilling fact that Patriarch Kirill and Vladimir Putin openly boast of Russia’s church-state relations as a 21st-century reincarnation of Byzantine symphonia: as goes the Kremlin, so goes the Patriarchate—or, more literally, Kremlin and Patriarchate speak with a single voice on both domestic and geopolitical affairs.

That so many American converts to Orthodoxy look to Russia and the institutional Russian Church with blinders on is alarming enough. That the Primate and Holy Synod of the OCA—which is presumably not only the Orthodox Church in America, but for America—continue to sell their collective soul to the Moscow Patriarchate in exchange for the OCA’s uncanonical autocephaly and the imaginary prestige of a “representation church” in Moscow is nothing less than a damning indictment of the OCA’s anti-American and anti-Canadian loyalties at the highest levels of ecclesiastical governance. 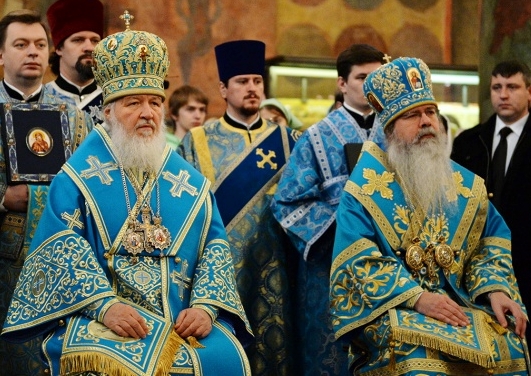 American conservatives who find themselves identifying with Putin’s regime refuse to see the country for what it actually is.

Sherwood Eddy was a prominent American missionary as well as that now rare thing, a Christian socialist. In the 1920s and ’30s, he made more than a dozen trips to the Soviet Union. He was not blind to the problems of the U.S.S.R., but he also found much to like. In place of squabbling, corrupt democratic politicians, he wrote in one of his books on the country, “Stalin rules … by his sagacity, his honesty, his rugged courage, his indomitable will and titanic energy.” Instead of the greed he found so pervasive in America, Russians seemed to him to be working for the joy of working.

Above all, though, he thought he had found in Russia something that his own individualistic society lacked: a “unified philosophy of life.” In Russia, he wrote, “all life is focused in a central purpose. It is directed to a single high end and energized by such powerful and glowing motivation that life seems to have supreme significance.”

Eddy was wrong about much of what he saw. Joseph Stalin was a liar and a mass murderer; Russians worked because they were hungry and afraid. The “unified philosophy of life” was a chimera, and the reality was a totalitarian state that used terror and propaganda to maintain that unity. But Eddy, like others in his era, was predisposed to admire the Soviet Union precisely because he was so critical of the economics and politics of his own country, Depression-era America. In this, he was not alone.

In his landmark 1981 book, Political Pilgrims: Travels of Western Intellectuals to the Soviet Union, China, and Cuba, Paul Hollander wrote of the hospitality showered on sympathetic Western visitors to the Communist world: the banquets in Moscow thrown for George Bernard Shaw, the feasts laid out for Mary McCarthy and Susan Sontag in North Vietnam. But his conclusion was that these performances were not the key to explaining why some Western intellectuals became enamored of communism. Far more important was their estrangement and alienation from their own cultures: “Intellectuals critical of their own society proved highly susceptible to the claims put forward by the leaders and spokesmen of the societies they inspected in the course of these travels.”

Hollander was writing about left-wing intellectuals in the 20th century, and many such people are still around, paying court to left-wing dictators in Venezuela or Bolivia who dislike America. There are also, in our society as in most others, quite a few people who are paid to help America’s enemies, or to spread their propaganda. There always have been.

But in the 21st century, we must also contend with a new phenomenon: right-wing intellectuals, now deeply critical of their own societies, who have begun paying court to right-wing dictators who dislike America. And their motives are curiously familiar. All around them, they see degeneracy, racial mixing, demographic change, “political correctness,” same-sex marriage, religious decline. The America that they actually inhabit no longer matches the white, Anglo-Saxon, Protestant America that they remember, or think they remember. And so they have begun to look abroad, seeking to find the spiritually unified, ethnically pure nations that, they imagine, are morally stronger than their own. Nations, for example, such as Russia.

The pioneer of this search was Patrick Buchanan, the godfather of the modern so-called alt-right, whose feelings about foreign authoritarians shifted right about the time he started writing books with titles such as The Death of the West and Suicide of a Superpower. His columns pour scorn on modern America, a place he once described, with disgust, as a “multicultural, multiethnic, multiracial, multilingual ‘universal nation’ whose avatar is Barack Obama.” Buchanan’s America is in demographic decline, has been swamped by beige and brown people, and has lost its virtue. The West, he has written, has succumbed to “a sexual revolution of easy divorce, rampant promiscuity, pornography, homosexuality, feminism, abortion, same-sex marriage, euthanasia, assisted suicide—the displacement of Christian values by Hollywood values.”

This litany of horrors isn’t much different from what can be heard most nights on Fox News. Listen to Tucker Carlson. “The American dream is dying,” Carlson declared one recent evening, in a monologue that also referred to “the dark age that we are living through.” Carlson has also spent a lot of time on air reminiscing about how the United States “was a better country than it is now in a lot of ways,” back when it was “more cohesive.” And no wonder: Immigrants have “plundered” America, thanks to “decadent and narcissistic” politicians who refuse to “defend the nation.” You can read worse on the white-supremacist websites of the alt-right—do pick up a copy of Ann Coulter’s Adios America: The Left’s Plan to Turn Our Country Into a Third World Hellhole—or hear more extreme sentiments in some evangelical churches. Franklin Graham has declared, for example, that America “is in deep trouble and on the verge of total moral and spiritual collapse.”

What a terrible place all of these people are describing. Who would want to live in a country like that? Or, to put it differently: Who wouldn’t sympathize with the enemies of a country like that? As it turns out, many do. Certainly Buchanan does. Russian cyberwarriors work with daily determination to undermine American utilities and electricity grids. Russian information warriors are trying to deform American political debate. Russian contract killers are murdering people on the streets of Western countries. Russian nuclear weapons are pointed at us and our allies.

Nevertheless, Buchanan has come to admire the Russian president because he is “standing up for traditional values against Western cultural elites.” Once again, he feels the shimmering lure of that elusive sense of “unity” and purpose that complicated, diverse, quarrelsome America always lacks. Impressed with the Russian president’s use of Orthodox pageantry at public events, Buchanan even believes that “Putin is trying to re-establish the Orthodox Church as the moral compass of the nation it had been for 1,000 years before Russia fell captive to the atheistic and pagan ideology of Marxism.”

Please continue reading at The Atlantic.

See also the panel discussion on this article at MSNBC’s Morning Joe.

Anne Applebaum holds an MA in international relations from the London School of Economics, where she currently teaches as a visiting professor of practice and runs Arena, a project on propaganda and disinformation. In 2004 she won the Pulitzer Prize for her Gulag: A History. Her latest book is Red Famine: Stalin’s War on Ukraine. See her complete list of articles for The Atlantic here.

One thought on “THE FALSE ROMANCE OF RUSSIA by Anne Applebaum”